We are delighted to share the news that our Immunotherapy team have just published their latest findings. They tried combining a drug with the immunotherapy they are currently developing to see if it would boost the killing of prostate cancer cells. The full paper can be read here, and we’ve summarised some of the main points in this blog.

The immune system protects us by recognising and attacking things which might make us ill, such as viruses, bacteria, or unhealthy cells (like cancer cells!). Your immune system is made up of a complex system of cells, known as immune cells, and special proteins that the cells interact with. Immune cells, or white blood cells, are the key players in your immune system. They are constantly moving through your body on the patrol for things they don’t recognise. When they find a target, they activate, and begin to multiply and send signals out to other immune cells to do the same. This is how the immune system kills targets and keeps you healthy. Prostate cancer: The promise and problems of immunotherapy

Immunotherapy aims to train the body’s own immune system to become better at finding and destroying tumour cells. So far, however, this approach has had limited success in prostate cancer. This team of PCR researchers wanted to investigate if they could overcome this issue by administering their immunotherapy directly into the tumour.

Read more about their project

INTERLEUKIN-15: WHAT IT IS AND WHY WE ARE INTERESTED IN IT?

A number of different approaches are being tried to make immunotherapy work in prostate cancer.

This research team are particularly interested in an immune system protein called interleukin-15, or IL-15. IL-15 is known to be important in the immune system, and the team discovered that when it was in the presence of prostate cancer cells, it could both switch on immune cells and increase their number. This IL-15 immunotherapy also reduced tumour size by 50% with no side effects.

In this study, the researchers combined IL-15 with another drug called a cyclic dinucleotide (CDN). This was to test whether combining them could boost the effects IL-15 further than when used alone.

The CDN Christine’s team used is a STING agonist. Agonists switch on receptors and, in this case, the CDN activates a receptor named the Stimulator of Interferon-Gene (STING) receptor. When switched on, STING receptors release signals that help activate immune cells. Therefore, combining this STING agonist with IL-15 might boost the effect the scientists previously saw; more immune cells could be switched on, hopefully increasing the number of prostate cancer cells killed by your own immune system.

The team found that using a combination of IL-15 and the STING agonist resulted in more prostate cancer cells being killed, than when using either of the drugs alone. 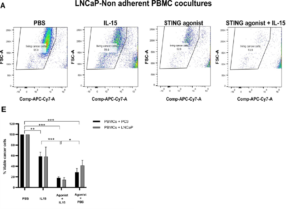 The team showed that the increase in killing of cancer cells was due to an increase in the number of NK cells activated. Figure 4A shows the increase in numbers of activated NK cells when they are mixed with different prostate cancer cells with IL-15 present, or with a combination of IL-15 & STING agonist, compared with a control.

They measured markers of NK cell activation and saw that they were increased when both IL-15 and the STING agonist were used. This shows that more NK cells were switched on and producing chemicals that kill cancer cells. Christine’s group also saw a lack of cancer cells being killed when NK cells were removed from the experiment, which supports their finding.

THE FUTURE OF IMMUNOTHERAPY

Studies on this particular combination of treatments in mice (in vivo) are currently ongoing; so far, this work has been in a lab dish (in vitro). If the results are also seen in mice, this combination of STING agonist and IL-15 immunotherapy is one step closer to being a potentially effective future prostate cancer treatment. Knowing how to improve immunotherapies is incredibly important work as these types of treatment haven’t had as much success in prostate cancer. Dr Christine Galustian in her laboratory at King's College London

Scientific publications, commonly referred to as papers, are how scientists share their own work or review the work done by others. In order to be accepted for publication in a journal, they must first be approved by experts in the field (“peer-reviewed”). As such, they are a testament to a scientific team’s credibility and the quality and reliability of their work. Both the stamp of approval given by a publication, and the ability of other scientists to learn about and build upon a team’s research, are important steps to take lab science closer to real-life benefits for humans. This publication is an original research article, in which a team of scientists share their own work and discoveries.

This paper, under the full title “Combination of Interleukin-15 With a STING Agonist, ADU-S100 Analog: A Potential Immunotherapy for Prostate Cancer”, was published in the journal Frontiers in Oncology. The publication is open access, meaning the information is available to readers at no cost, and the journal’s Impact Factor (a measure of a journal’s influence in academic research circles) is 4.848.

The researchers who contributed to this paper are , Efthymia Papaevangelou, Prokar Dasgupta and Christine Galustian. They are based at King’s College, London, where this work was carried out. Prokar Dasgupta also works at the Urology Centre in Guy’s Hospital, London.