This story first appeared in our Summer 2020 newsletter, order your physical copy here.

We’re taking a look at some of the biggest news and research updates from this year so far. Even in lockdown, science is constantly moving forwards to a better future for everyone affected by prostate cancer.

Studies have shown that involving individuals in decision-making concerning their own treatment can improve quality of life. Researchers in Germany have now found that those who take a more active role in making decisions about their prostate cancer treatment may be less likely to experience ‘decision regret’. The study followed up with men who took part in HAROW, a German research project that analysed the outcomes of different prostate cancer treatments. The researchers were investigating whether men who had undergone prostate surgery regretted their treatment decisions. Unsurprisingly, they also found that patients who experienced fewer side-effects and whose cancer did not come back had fewer regrets. Further research is needed to confirm these findings as there have been very few studies into prostate cancer and decision regret.

Figures released by Public Health England have revealed that prostate cancer is now the most commonly diagnosed cancer in England. Despite this, researchers at the University of Milan have analysed data on cancer and found that the death rate from prostate cancer is falling across the EU. At the time the study was published, they predicted that in the UK, the prostate cancer death rate will be 9.5% lower in 2020 compared to 2015. This means that although the number of prostate cancer diagnoses is increasing, an individual’s risk of dying from prostate cancer is decreasing. It is thought that this is the result of years of groundbreaking research leading to better diagnosis and treatment – from improvements in surgery, to the development of new hormone therapies. Here at PCR, we have committed to continuing to increase the amount of research we fund and look forward to funding more projects with our latest grant call. 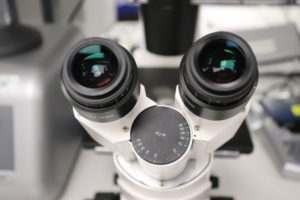 An Update on the PROfound Trial

In the last issue, we reported on PROfound, a trial investigating whether the drug olaparib can be used to treat advanced prostate cancer. Olaparib damages genes,
leading to the death of cancer cells. It is currently used to treat ovarian cancer. The latest results from PROfound were announced in April. It was found that, compared to the hormone therapies abiraterone and enzalutamide, olaparib improves overall survival in men with advanced prostate cancer, who have stopped responding to hormone therapy, and who have changes in their DNA known as BRCA1/2 or ATM mutations. Mutations like these, which mean cancer cells struggle to fix faulty DNA, occur in approximately 20–30% of advanced, hormone-therapy-resistant prostate cancers. Scientists previously reported that using olaparib stopped cancer from getting worse for around four months and that men taking it spent less time in pain and may have lived longer. The companies who produce this drug are working with regulators to get it to patients as quickly as possible. It has now been approved for use in prostate cancer patients in America. You may have seen headlines describing a new blood test that can diagnose prostate cancer and indicate without invasive procedures whether a person has advanced disease. These headlines were based on a study from University College London. Researchers analysed 25 blood samples from men with advanced prostate cancer and four healthy samples. They investigated changes to DNA, known as DNA methylations, which can affect the way a gene functions. They found that the blood samples from men with prostate cancer contained thousands of DNA changes specific to the prostate gland. The researchers used these findings to develop a blood test that can monitor prostate cancer. The test is now being assessed in clinical trials. Professor Gert Attard, who is funded by PCR for a different project, explained ‘We believe the increased sensitivity and additional information we derive will significantly improve the outcomes of men with advanced prostate cancer.’